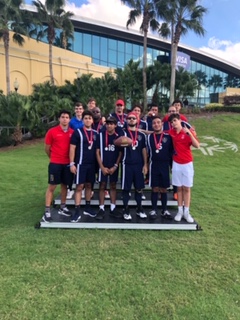 The Belen Jesuit Wolfpack is known across Miami-Dade as not just the biggest and most succesful Unified Champion School team, but also one of the most competitive teams in the area, period. The team competes in Soccer, Flag Football, and Basketball and has qualified and placed numerous times in each sport. The team consists of a unique array of athletes that bring the team a ray of joy and skill. We are by nature a school club so we have a volunteer and partner component that participate and compete with the athletes in practices and games.

We were established in 2016, by student leaders in Belen Jesuit. Since its birth, the team has been a beacon for the community and its school. Under the former coaches, Javier Guerrero and Guillermo Quintero, the team spearheaded kickball tournaments, on-campus training sessions, and organized high-quality practices backed by impressive fundraising. The Wolfpack has also been a beacon for other students, under Javi, Gui, and Julian's leadership there has been a substantial increase in student involvement for Unified Champion Schools. Students have become inspired by the team's interest in quality, service, and sports. The Wolfpack has hosted numerous fundraising events for Special Olympics with great success.

On its athletic achievements, for the past 4 years the team has become a powerhouse in Miami, reaching state competitions every year and placing first or second in each competitions. The team has a diverse array of unified, traditional, and individual skills athletes and focuses on training athletes to the point where they can compete in team competitions. Throughout its course the team has been home over 30 athletes and over 100 partners and volunteers. Many partners that graduate from high school continue their Special Olympics mission in college. Now, in 2020, the Wolfpack has become more than a team. The Wolfpack has made it its responsiblity as a team to educate the students of its host school, Belen Jesuit, through physical homeroom talks, virtual get-togethers, and videos that showcase the values that Special Olympics holds.

In SOMDC, the Wolfpack growl has become an unstoppable force.