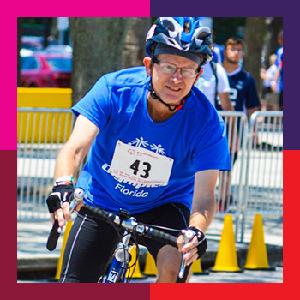 He picked up the sport eight years ago, and, since then has been turning heads with his commitment and world-class work ethic. He won cycling gold medals in four consecutive State Games, taking home the top prize in 2016, 2017, 2018, and 2019. Last year, he conquered the Amerithon Challenge, cycling 3,521 miles -– the distance from San Franscisco to Washington, D.C. -- over the course of several months. He began in June, cycling 25-30 miles a day, mostly around his neighborhood. Billy, who’s set a goal of running 2,021 miles in 2021, says he wants to show people with intellectual disabilities can do remarkable things if they’re only given the chance. “I'm trying to break all these barriers,” he said. “Anybody in the Special Olympics can do this with the support of your family and friends around you.”